A top-down, fast-paced shooter where you pilot a plane and use it to dogfight against those that seek to bring you down. Easy to understand but hard to master, the balance of risk-reward for score maximization while trying to not get overwhelmed is what this game is about! Try to reach to the highest score!

Inside the options menu there are some notable options that might ease your playtime:
- Toggle Clouds: When using phones, this option might help performance. (Might reduce dizziness if the rotating motion is too strong)
- Auto Fire: Makes you automatically shoot your gun, so you don't have to hold the button to shoot.
- Target Speed: This option allows you to press once UP or DOWN to determine if you wanna go fast or slow, instead of having to hold the key. (Might reduce the degree of control of the ship, but it certainly helps when playing on phones)
- Toggle Music: To turn on or off the music, if you wish to only hear the SFX of the game.
I personally recommend to enable the first three options if you wanna play on mobile devises (or just auto fire and target speed, if your devise can handle the clouds)

While having started as a completely different idea (of a spaceship in space traveling from station to station), scope creep slowly made its way to my development and I nearly stopped working on this project. But having had enough of dealing with unfinished projects, I decided to change the scope of the game to something that would force a limited creative space. Working on Pico-8, in this regard, made things easier, as you cant go too overboard with mechanics, so I kept it simple and this game came out of it.

Id say a big point of reference for me is "Devil Daggers", that while I may have not have experienced it (yet!), its gameplay has always been alluring, and while this project doesn't go to the same depth that Devil Daggers goes, I feel that its roots are on the same area: risk management and score maximization.

Being honest, I did feel like I rushed this game towards the end, wanting to have it publish as soon as possible, as I feared that doubting publishing it would just make it gather dust like the rest of my projects till it became nothing but an "old idea id love to revisit". Hopefully, posting this game will be the start of a sequence and not a random happening.

Many thanks to the Lazy Devs Discord Server! Honestly, it has been so invigorating sharing and seeing so much creativity among the members. I thank them for the feedback and for their positive reinforcements. And of course, to @krystman, for making such a community happen in the first place. Also a very dear thank you to "epicheezeness", for letting me ramble to no end and pushing me gently into moving forward.

The notes played by the shooting of the players gun is the root of the key of the song that plays, the motor hums the minor third and the enemy bullets play the 5th, and that makes the minor chord this song starts on!

Pretty cool game! I didn't see it on lexaloffle, have you posted it there?

I have not yet done it, but will be doing soon. Since release Ive been informed of a couple of things and I'll fix them before posting it there.

Edit: The game has now been uploaded to lexaloffle! 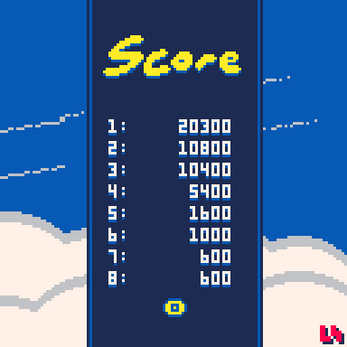